This main goal of this game is to prevent fighting with each other but is competing against the house. Players need to try their best to get the total card value of 21 but not exceed 21.

21 is the simplest casino card game for the beginners. Let’s learn some basics of this. Before starting the game, every player and also the dealer will get two cards, one is face up and the other is facing down. The player who owns an Ace card, in the beginning, will have higher possibilities to win because the Ace card can be counted as 10 points.

The benefit of this game on the dealer side is the players must act before the dealer, so the dealer had the opportunity to collect the best of players who exceed 21 points.

Now, the dealers will check their face down card. If this card is Blackjack, then the players who also had Blackjack is considered to win and others will lose their bets. At the same time, the players who own Blackjack and had insurance bet will get paid with 2:1 payment. 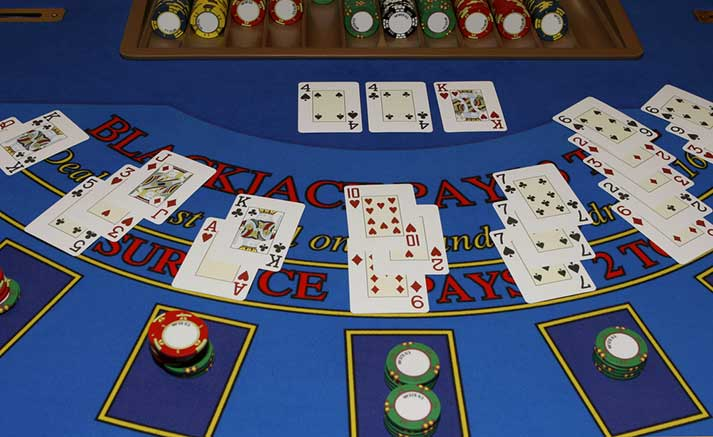 After that, the game will continue from the left side of the dealers. They have several options to play:

The players can choose to have a new card for the round. Then, the dealer will deal with a face-up card to the player. If the total card value of the player is less than 21, the player can decide to deal with one more new card unless it does not exceed 21 points. If exceed 21, then considered a bust and the bet will collect by the dealer. Then, the turn will be passed to the next player.

If the players feel satisfied with the total value of their first two cards, then they can choose to stand in the round and pass the turn to the next player. Players can wave a flat hand over the cards as the signal of Stand.

If the players own the total card values of 9, 10 or 11 at the first two cards, then they have the option to double down. They will be dealt with a new face-up card but will be forced to Stand due to the total. This option is only available for the players who had two hands.

This option is available for the players who had the matching rank but they need to place the equal bet with their original bet and then just can split the hands into two. Then, each of the hands will be dealt with a new card. The players can maximum split their hands 4 times but only one time in around.

Some casinos are allowed for only one split while some might allow for few times splitting. Depend on the casino you choose, if you own the card value of 10, some casino will allow you to split but some might not. So, to determine whether a player is allowed to Double down after splitting depends on the house rules of the casino chosen. So, please remember to understand the house rules of the casino you choose before you start to play. It is important. It can affect you against the paid you win and lose. Be tactical while playing 21.